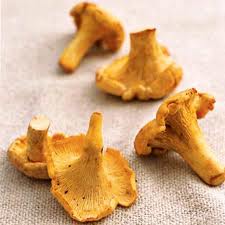 The yellow or golden chanterelle mushroom (Cantharellus cibarius) is known as the glamorous mushroom, prized for its golden appearance and fruity aroma and flavor. These distinctive characteristics make it seem more like a fruit or flower then a fungus. In the wild, this edible mushroom is easy to identify by its bright golden yellow color. These are in season from June to September, growing in the forest under conifer or oak trees. They are smooth and firm, perfect whole in pasta dishes, stir-fry dishes or served atop steaks sliced thickly. 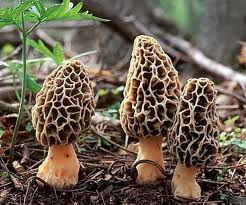 Morels, among the most common edible mushrooms in North America, are used often in cooking for their delicate flavor and versatility. These mushrooms are the first fungi to grow after flowers appear in the spring. They flourish in moist soil with a sandy consistency, by streams or under apple, elm and ash trees. These mushrooms can range from steel gray to creamy yellow, with colors such as tan and gold in between. These mushrooms, with a firm texture and large caps, are used in almost any type of cooking. 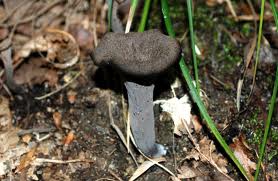 Black trumpets are some of the rarest and most valuable edible mushrooms, especially in French cuisine. The black trumpet is fragrant and aromatic, with a fine, delicate taste and texture. When you smell one, you will think you are sniffing grapes or apricots. These are in season during the summer months and grow rapidly under oak trees but never on wood. And don't let the name fool you: black trumpets can range from pink to gray to chocolate brown in color. These can be expensive, whether you buy them from a farmers market or to top a dish in a restaurant. 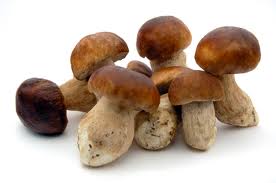 These edible mushrooms have a different name wherever you go. In France, it is known as the cep. In Italy it is the porcini, and in the United states it is known as the king bolete. This variety is common, with a light, crisp flavor and the ability to stay firm after being cooked, unlike other mushrooms. They are in season from summer to early fall and are most recognizable by their growth of clusters. The color spans from dark red to brown, to creamy white. The top differs from other mushrooms as it is skinny and dome-shaped, with a spongy texture.

Posted by Our Food Recipes at 3:01 PM 2 comments: Links to this post 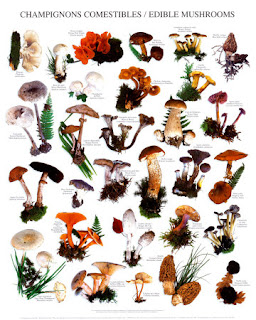 Posted by Our Food Recipes at 3:03 PM No comments: Links to this post 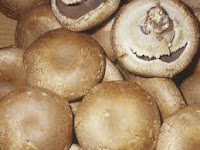 Agaricus bisporus, also known as champignon and the button mushroom. This species also includes the portobello and crimini mushrooms.

Flammulina velutipes, the "winter mushroom", also known as enokitake in Japan
Hypsizygus tessulatus (also Hypsizygus marmoreus), called shimeji in Japanese, it is a common variety of mushroom available in most markets in Japan. Known as "Beech mushroom" in Europe.

Pleurotus species, The oyster mushroom and king trumpet mushroom. Pleurotus mushrooms are the second most important mushrooms in production in the world, 25% of total world production of cultivated mushrooms. Pleurotus mushrooms are world-wide, China is the major producer. Several species can be grown on carbonaceous matter such as straw or newspaper. In the wild they are usually found growing on wood.
Rhizopus oligosporus - the fungal starter culture used in the production of tempeh. In tempeh the mycelia of R. oligosporus are consumed.

Sparassis crispa - recent developments have led to this being cultivated in California.
Tremella fuciformis (Snow fungus), another type of jelly fungus that is commonly used in Chinese cuisine.

Tuber species, (the truffle), Truffles belong to the ascomycete grouping of fungi. The truffle fruitbodies develop underground in mycorrhizal association with certain trees e.g. oak, poplar, beech, and hazel. Being difficult to find, trained pigs or dogs are often used to sniff them out for easy harvesting.
Terfezia sp. (Desert truffle)

Ustilago maydis (Corn smut), a fungal pathogen of the maize plants. Also called the Mexican truffle, although not a true truffle.

Posted by Our Food Recipes at 7:39 PM No comments: Links to this post 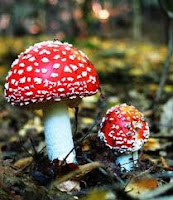 There are a number of edible mushrooms that are considered choice by some and toxic by others. In some cases, proper preparation can remove some or all of the toxins.

Amanita muscaria is edible if parboiled to leach out toxins. Fresh mushrooms are hallucinogenic and may cause seizures or coma due to the presence of ibotenic acid.

Coprinopsis atramentaria is edible without special preparation. However, consumption with alcohol is toxic due to the presence of coprine. Some other Coprinus spp. share this property.

Gyromitra esculenta is eaten by some after it has been parboiled; however, mycologists do not recommend it. Raw Gyromitra are toxic due to the presence of gyromitrin, and it is not known if all of the toxin can be removed by parboiling.

Verpa bohimica - Considered choice by some, it even can be found for sale as a "morel", but cases of toxicity have been reported. Verpas contain toxins similar to gyromitrin and similar precautions apply.
edible mushrooms:oyster-mushroom-pleurotus-ostreatus
Posted by Our Food Recipes at 7:36 PM 1 comment: Links to this post